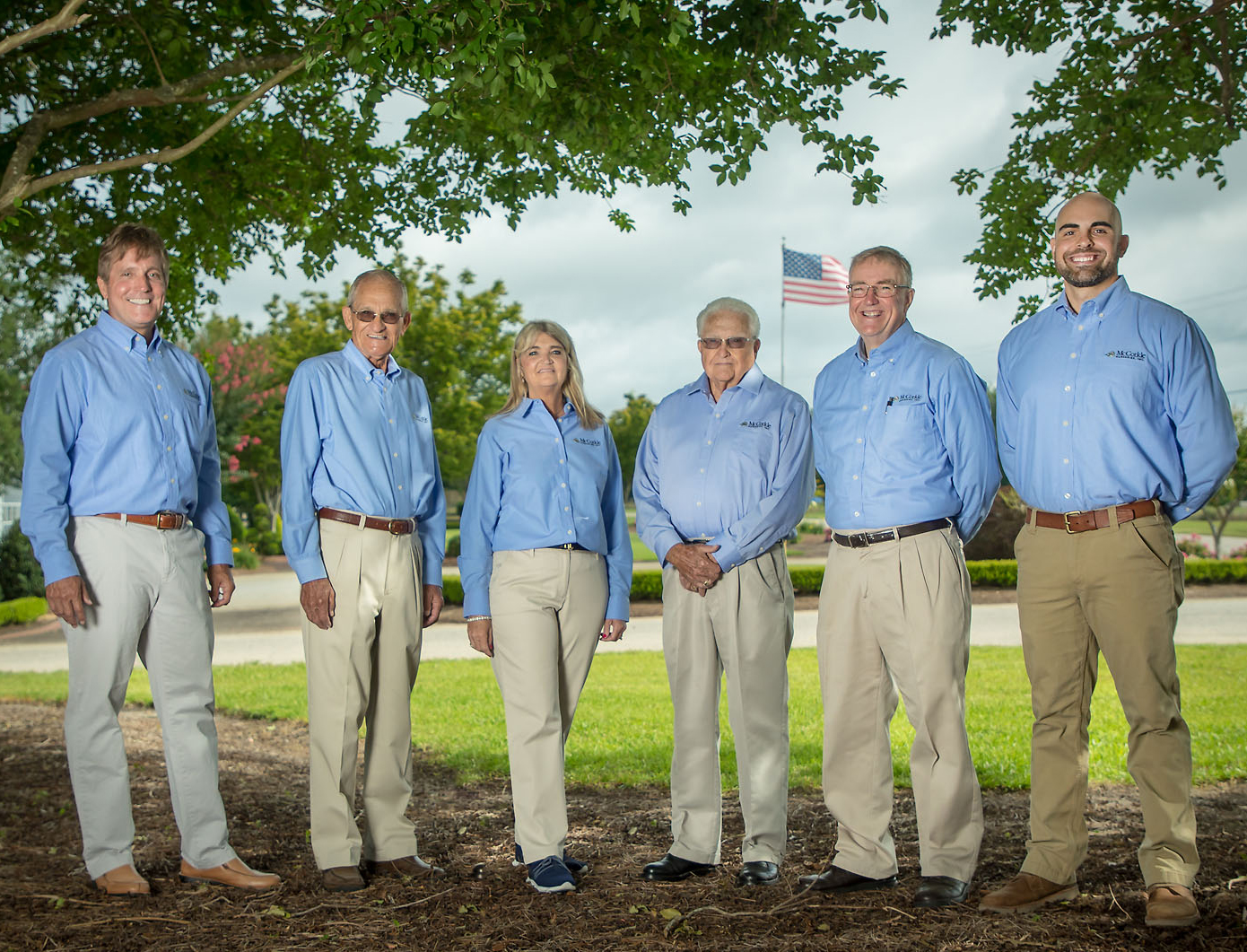 “We have been greatly blessed to work together and grow our team over the past 80 years as we work to make our world more beautiful with plants. It’s our honor to not just grow plants but to grow our team and to serve so many great customers and WOW them with plants!” ~ Skeetter McCorkle 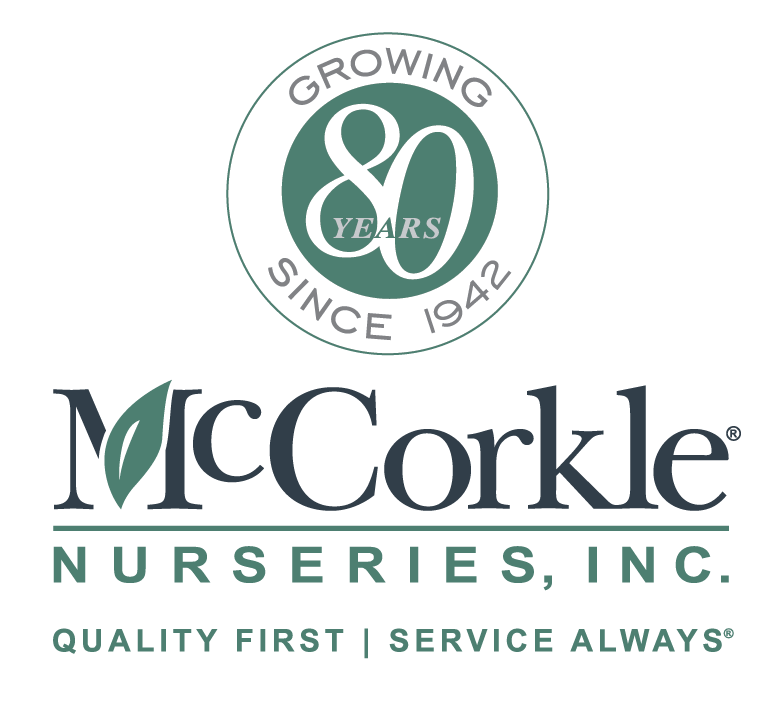 2022 McCorkle Family Leadership: pictured from left to right: Chris, Jack, Beverly, Don, Skeetter, and Ben. Four generations of the McCorkle family, in addition to a dedicated workforce, carry on the operation started by C.S. and his wife Avice McCorkle in 1942. Following the core values handed down from their founder, McCorkle culture continues with a strong, focused, and hardworking team who has a commitment to faithfully serving its customers with great quality plants. 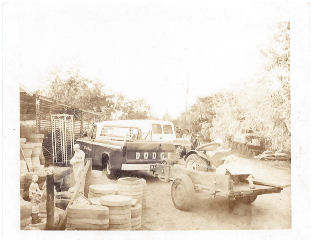 Our family-owned nursery was founded in 1942 by C.S. McCorkle, his wife Avice, and his mother Beatrice. The founders’ two sons, Don and Jack, are active in the business daily while mentoring the third and fourth generations of McCorkle family leaders. Jack’s son Chris is VP of Operations; Don’s daughter Beverly works in Rewholesale; and Skeetter, Don’s son, is CEO. In 2019, Skeetter’s son, Ben, joined the family business as its CFO. In addition to the McCorkle family members, the Lord has blessed our company with an extended “family” of approximately 175 team members, many of whom have multiple generations of involvement. From our start as an ornamental plant grower during the Great Depression to establishing a retail and landscaping business post-World War II, the family business weathered setbacks in the early days. Undeterred, we were able to persist and grow, and in 1977, our company refocused on growing plants and providing wholesale distribution from the family’s farm near Dearing, GA. 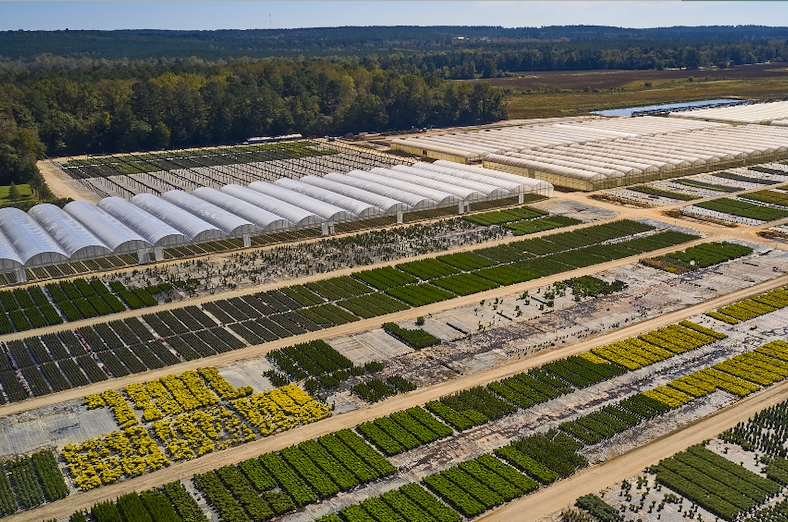 Since the late 1970s, our company has enjoyed significant growth, serving retail garden centers and landscapers across the Southeastern and Mid-Atlantic states. In addition to being a licensed grower for most major plant brands, McCorkle Nurseries launched its own line of top-performing plants, the Gardener’s Confidence® Collection, which features more than 70 patented and trademarked selections. Having made a commitment in 1996 to support horticultural research, our company developed the Center for Applied Nursery Research (CANR), in conjunction with the University of Georgia’s Horticulture Department. Located adjacent to the nursery, CANR advances commercial nursery management practices and provides numerous successful plant introductions. Taking innovation another step in 2007, MNI Direct was launched to serve the professional landscape trade from four locations. Innovation and leadership go hand in hand, and over the years McCorkle leaders have served in numerous roles in national and state industry organizations. Our company continues to take a forward-looking approach, utilizing advanced robotic technology; rigorous quality measures; innovative plant shipping methods; irrigation and rainwater harvesting, water, and waste recycling systems; and the latest methods in the use of biological controls and Integrated Pest Management (IPM). By example, Don and Jack McCorkle inspire the current leadership with what Jack calls their “family tradition of honesty, hard work, and caring for the people we touch.” Skeetter agrees, “Our values are our roots, and our aim is to promote integrity while being a Christian-centered, family business.” 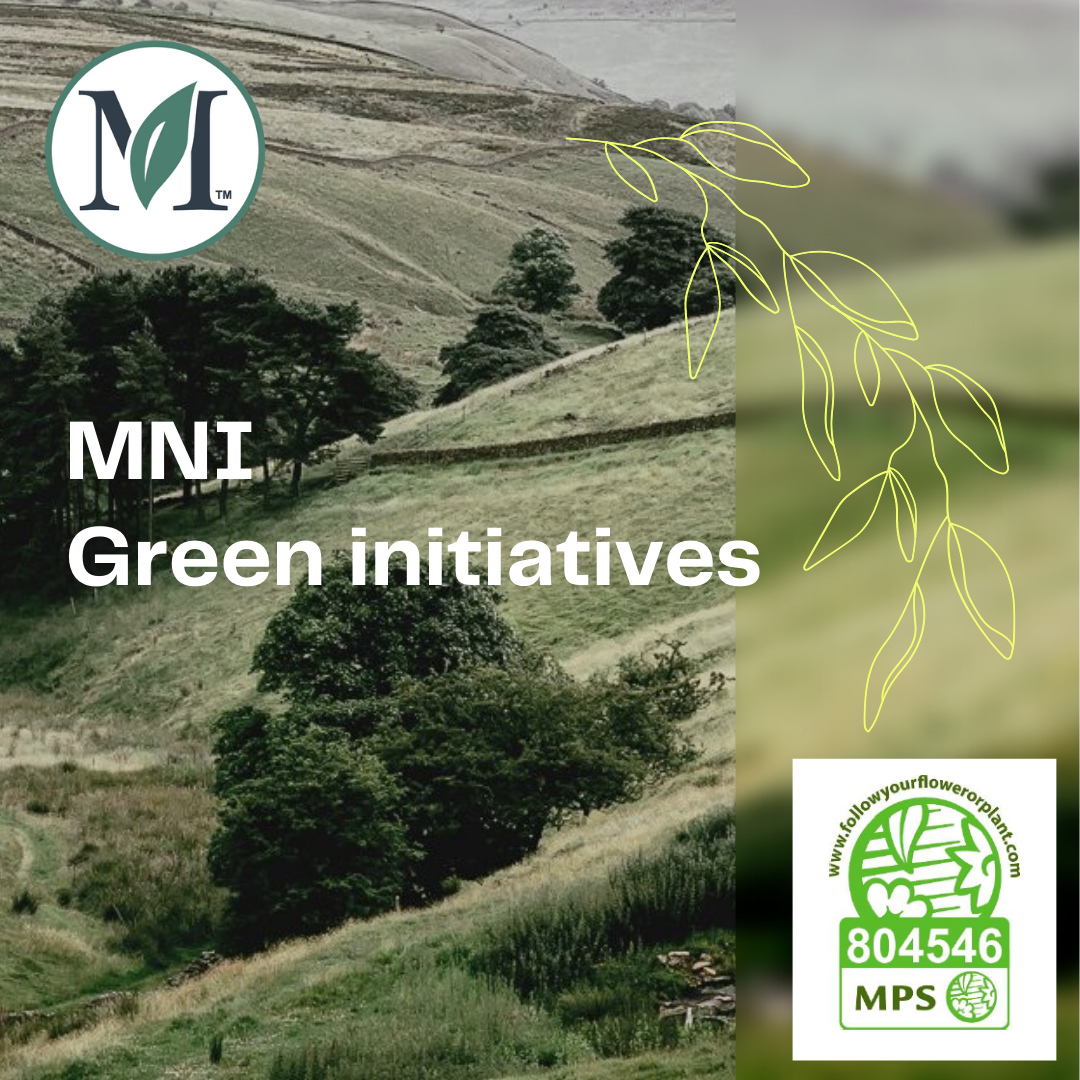 McCorkle Nurseries’ commitment to sustainable and environmentally responsible growing practices has been recognized by MPS (More Profitable Sustainability) with an MPS-ABC certificate, the international standard for sustainability in the flowers and ornamental plant industry. MPS-ABC provides a transparent, quantifiable look into the operational sustainability of each company involved in the growing process of a plant. The ratings of each company on a plant’s journey from seed to store can be tracked on the website www.followyourflowerorplant.com. Arthij van der Veer, General International Coordinator North and Central America for MPS, says, “I have seen the efforts and energy that the whole team at McCorkle has put into the journey to becoming more sustainable. It is great to see that a grower can, with the help of management reports from MPS, be a good steward for the environment and be able to produce the high-quality products that McCorkle does.” More than 3,000 growers in over 50 countries participate in MPS-ABC. In North America, approximately 70 growers are participating currently in MPS-ABC. McCorkle Nurseries has been a pioneer in pursuing this standardized and measurable rating of sustainability in North America, and the first nursery shrub grower to receive an A rating. Skeetter McCorkle, CEO of McCorkle Nurseries, Inc. in Dearing, Ga., says, “As a family-owned company, we have always focused on leaving a legacy for our future generations, including a green and healthy earth. At McCorkle Nurseries, one of our guiding values is to serve as stewards of God’s creation. It drives our commitment to protect and improve the environment.” McCorkle Nurseries has systematically improved its environmental stewardship in a number of ways, such as a plant health program that relies on careful monitoring and biocontrols, including beneficial insects, to guide and reduce the need for chemicals. As of 2019, all plants raised on site are grown without neonicotinoids in accordance with recommended management practices for pollinator safety. Additionally, McCorkle Nurseries uses water reclamation ponds for the majority of the 4 million gallons of water required daily during the peak growing season, and conducts recycling and composting programs on site to reduce and reuse waste materials. In February 2019, Acting U.S. Environmental Protection Agency (EPA) Director Andrew Wheeler chose McCorkle Nurseries as the site to announce several Federal measures, including proposed reform, funding, and policy affecting water use, infrastructure, and quality across the nation. 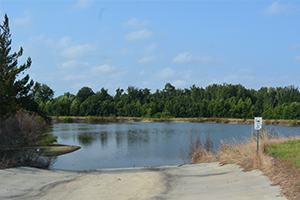 Stewardship of natural resources is a top priority for McCorkle Nurseries. Most run-off is reclaimed in 17 ponds. The majority of water used for irrigation is reclaimed run-off from production areas. Multiple pumping systems support irrigation requirements, including Neals Mill main pumping station, which is powered by three 75 horsepower turbine pumps capable of displacing up to 3,000 gallons per minute. All water from this system is treated and filtered and can be injected with liquid fertilizer. 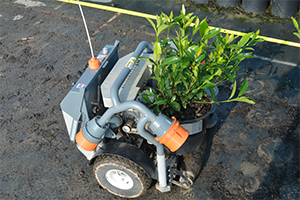 At McCorkle Nurseries, we currently employ 5 robots that tend to our plants. They work alongside the human employees and tirelessly adjust plants to the proper distance from each other for optimal growing conditions. 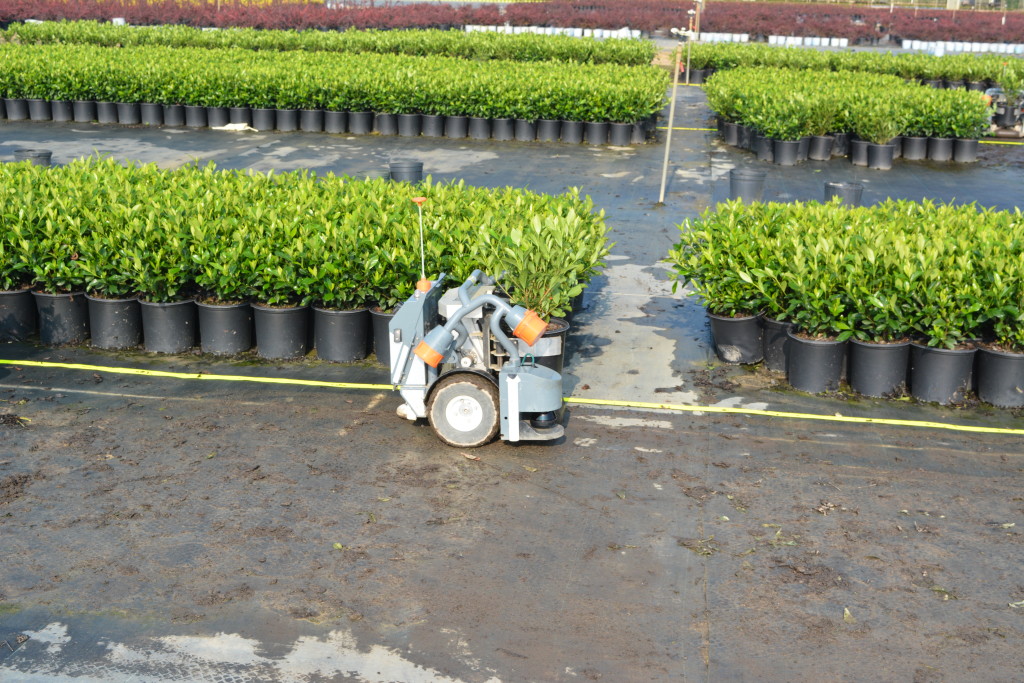 These robots have an adaptable approach to automation that allow them to scale their environment as well as responding to change. These robots are able to autonomously carry out their jobs without the help of any workers and are even able to account for any programming errors with their own sensory system. To learn more about the robots we employ, click here. 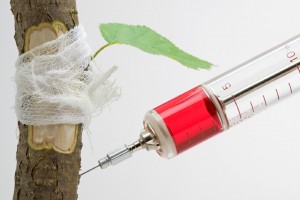 At McCorkle Nurseries, we are committed to producing the highest quality plants while continuing to be stewards of our environment. In this spirit, our Plant Health Department utilizes a variety of tactics in our Integrated Pest Management program to manage not only pests and diseases but total plant health. We actively monitor research, provide internal and external training for our employees, and trial new methods to improve our practices and maintain the most effective and up-to-date program available. One of our focuses is to limit the use of chemicals as a solution for pests, weeds, and other issues. Any time an item of concern is found on the nursery, the information about the potential issue is passed to the responsible department head and a non-chemical solution is searched for. If chemical intervention is needed, then they are used strictly according to the Occupational Safety and Health Administration (OHSA) standards and Worker Protection Standards which every employee is trained to know. Only certain, trained employees apply any chemicals and if there is an issue with safety then the applications are not made.